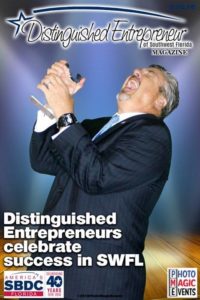 Entrepreneur of the Year of Southwest Florida. The Florida Small Business Development Center at Florida Gulf Coast University held a celebratory dinner May 18 at Harborside Event Center in downtown Fort Myers to make the big announcement.

The annual award recognizes a small- to mid-sized Southwest Florida business for its outstanding success. Equally exciting is that as part of the award, the FSBDC has nominated Chris for the Small Business Administration Small Business Person of the Year 2017, whose winners will be announced next spring. The awardees will be feted in a celebratory gala in the nation’s capital, with just one winner per state.

For the Distinguished Entrepreneur of SWFL honor, judges waded through the Spiro team’s comprehensive responses based on a number of factors that entrepreneurs face during their career, including:

As many of you might know, Chris is a long-time businessman in Southwest Florida. He launched his advertising career as an art director more than 31 years ago, and furthered his expertise as a designer and creative director. Over the years, Spiro & Associates has grown from a handful of people to a full-service company that serves clients representing an array of industries locally, regionally and nationally.

Congratulations also go out to John Benkert, CEO of CPR Tools who was awarded the Distinguished Business Innovator of the Year, and Judy Williams, owner of SPADA Day Salon and Spa who took home the Business Advocate of the Year award.