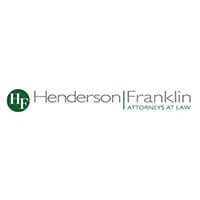 Founded in 1924, Henderson Franklin is headquartered in Fort Myers, Florida, and has offices in Sanibel and Bonita Springs. This esteemed law firm has played a key role in the history of Southwest Florida and in the formation of many of its communities and businesses. One of the oldest and largest law firms between Tampa and Miami, Henderson Franklin gave us the formidable task of creating an ad campaign that would break through the clutter in the legal services marketplace and remind the target audience of their longevity and diverse expertise. The final result was a unique visual motif that incorporated a street sign for a fictional intersection of two streets called Henderson and Franklin. Ads focus on the firm’s longevity as well as individual practice areas. The campaign was such a hit, we commissioned an actual street sign like those seen in the ads for the firm.