The Shell Factory & Nature Park has served Southwest Florida for over 80 years. The local attraction offers amusement-style rides, arcade games, miniature golf, 50,000 square feet of gift shops, a nature park with over 400 animals, birds, reptiles and fish, and much more. In 1997, current ownership took the helm, and over the years, transformed the property from a roadside tourist spot to a sought-out destination for locals, snowbirds and tourists. In the 20-plus years that our client has owned the venue, they have made extensive upgrades to the property, as well as created the Nature Park, which is an animal rescue, and formed The Nature Park Environmental Education Foundation, a 501(c)3 nonprofit organization. The client was at a crossroads and thought that their marketing efforts were lackluster and not providing the best results. The Shell Factory & Nature Park wanted to rebrand themselves in order to attract new customers, as well as customers that may not have visited the Shell Factory in a while. The client issued an open RFP and ultimately Spiro & Associates was awarded the account to develop a marketing campaign/brand evolution that would reinvigorate the destination, build excitement and increase awareness. 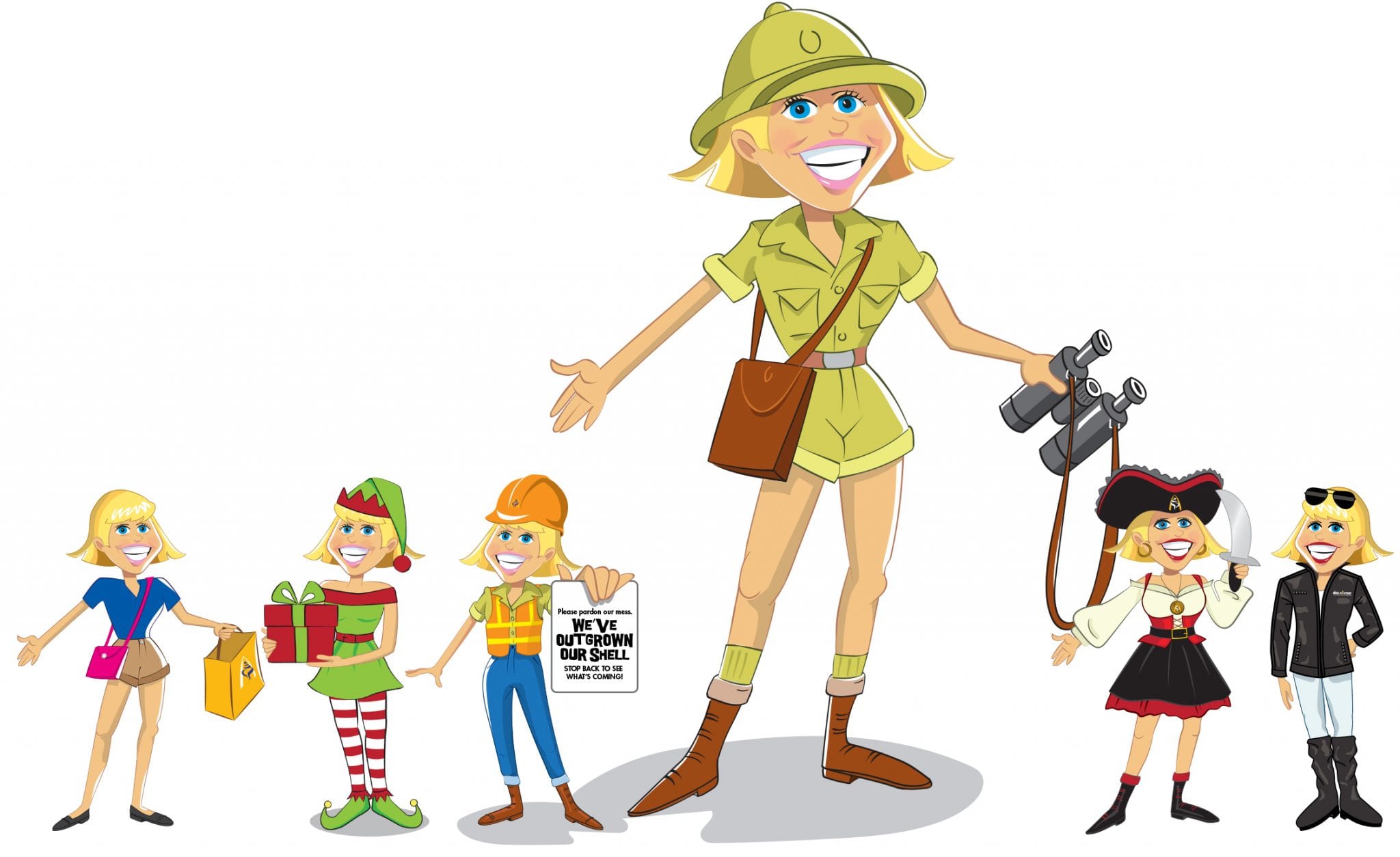 The Brand Architects™ kicked off the campaign with the development of a refreshed logo that represents the iconic and rich history that the Shell Factory is known for throughout the community. Playing off of this legacy and the fun and simplicity of the park, the evolved logo centers around the classic yellow arch with a renewed shell icon and incorporates a font in a beautiful shade of navy. It humbly demonstrates a “grown-up” version of the brand and instills the park’s unique transition from a roadside attraction to a destination of choice.

To accompany the logo, the Brand Architects developed a positioning line that resonated with a broader audience — toddlers, kids, tweens, grandparents and beyond. As the selling point of the brand is “a family-fun destination”, the Agency felt the best positioning statement that captured this idea was: The kitschiest, coolest, wildest, wettest, tastiest, craziest place in Southwest Florida!

Next, the Agency developed a “spokesplorer” who conveyed the whimsy and wonder and joy-inducing effect of experiencing the Shell Factory & Nature Park. “Shelly,” as she is called, is an explorer, animated to highlight the park’s amenities. Clad in safari attire – khaki shorts, top, pith helmet and Victorian-style boots — the spokesplorer is the central focus in the collection of messaging vehicles used to generate fascination and drive guest volume. She’s also depicted in biker gear, pirate attire and more.

To round out our efforts, the Agency capitalized on radio commercials and print paid media opportunities that reached a broad target audience with a goal of driving more visitors to the park. Radio spots highlighted events, such as Gumbo Fest, that ran on a variety of local stations. The digital platform included commercial TV slates. On the print side, ads ran on a consistent basis in The News-Press, Parent & Child, and Florida Weekly as well as in special editions, such as The News-Press “Best Of” and “Thank You”. 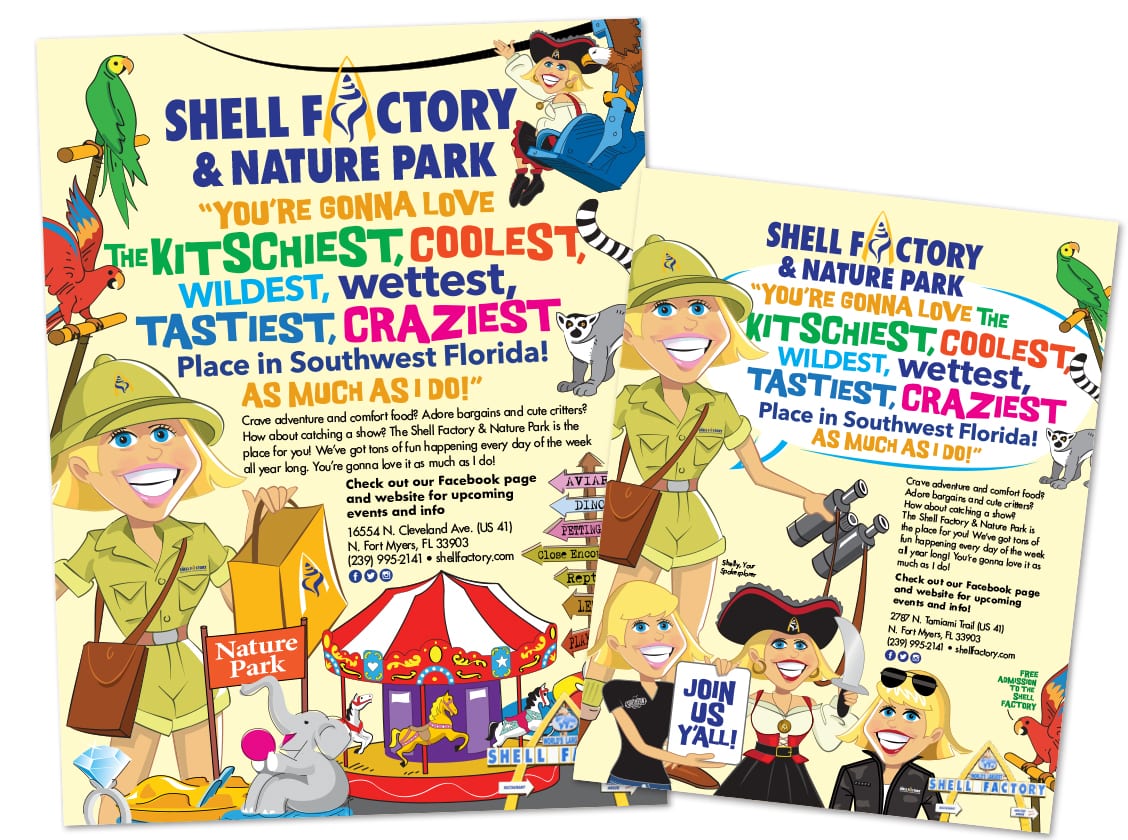 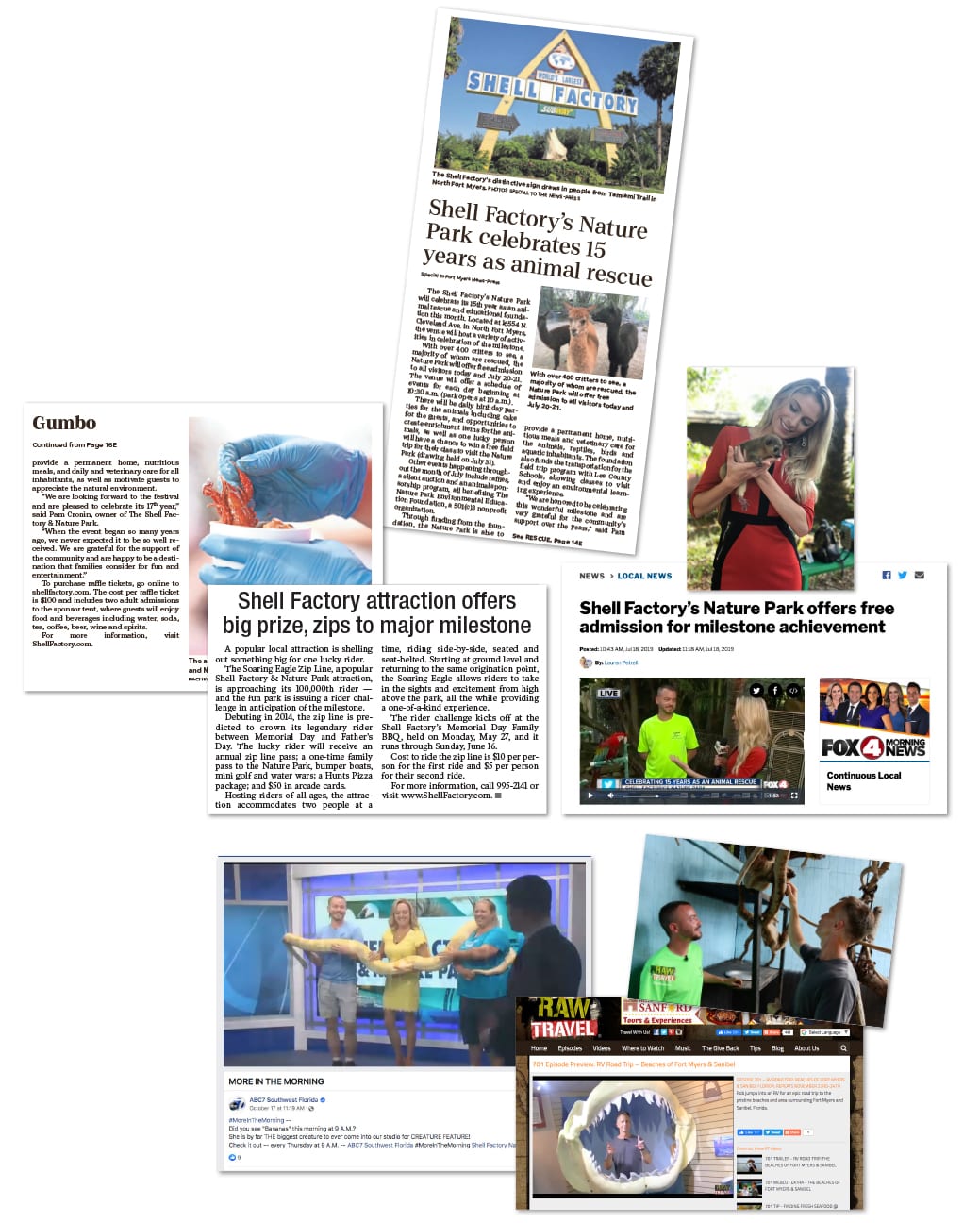 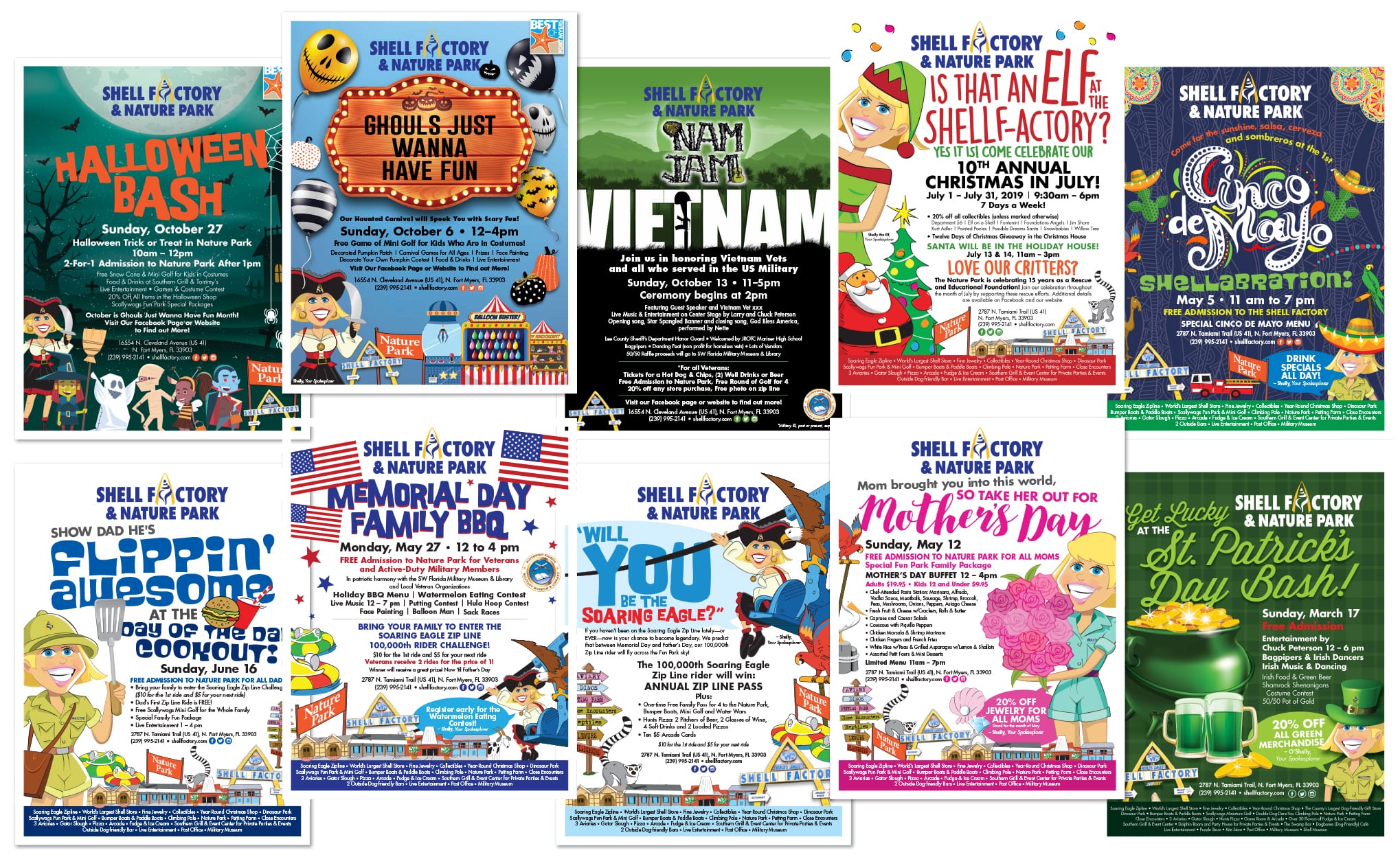 The campaign has been very effective since its inception. Shell Factory spokesplorer ‘Shelly’ has made millions of impressions as the personification of all the fun, one-of-a-kind experiences that visitors can discover at the Shell Factory & Nature Park. Public relations efforts have increased at a steady pace and have also shown great results, including:

• 70-plus mentions in print

The client is happy with the overall campaign
and its success. The campaign is still in effect and
continues to deliver positive results. And the future
is bright with the addition of the Players Circle Theatre 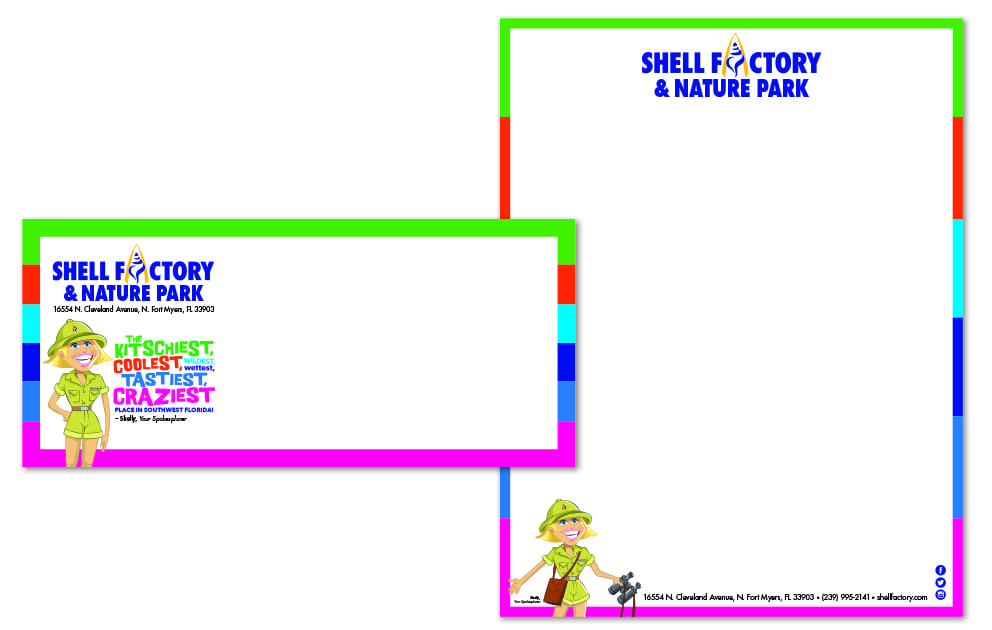 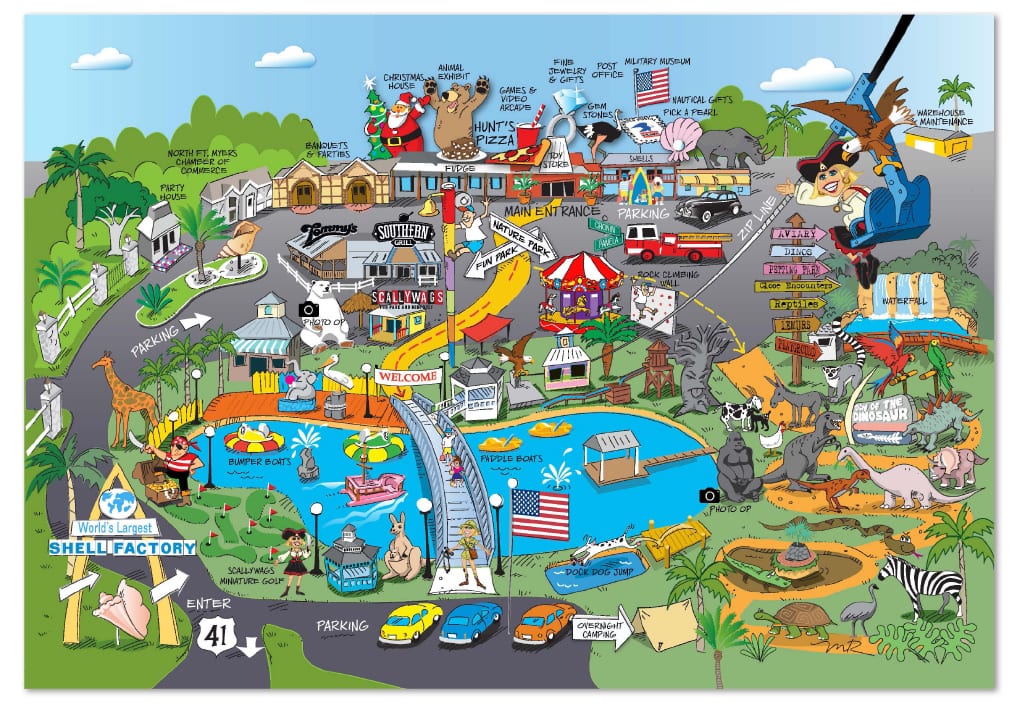